I recently participated in a pincushion swap hosted by Sandra in the Netherlands.  I received my pincushion from Melanie a couple of weeks ago which you can read about here.

A couple of days ago I received an email from Sandi, my swap partner, to tell me that she had received my parcel and to thank me for it.  Sandi said that she was going to post about it on her blog but hasn’t been able to because she’s been feeling under the weather lately, so in the interim, I’ll give you a peek instead. 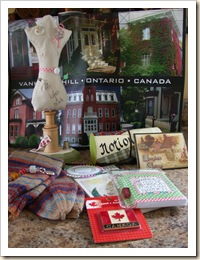 In the background is a tote bag made of recyclable products produced and distributed by our local newspaper, The Review.  The photos appearing on the bag are actual photos of some of the red brick houses that our town is noted for.

Just ahead of that on the left side is the pincushion I made for Sandi.  It is fashioned to look like a dressmakers form and it was fun to make and embellish.  To the right of the pincushion is a notion box that I designed and painted and  leaning on the notion box is a package of Jeana Kimball needles.

In the foreground on the left is a pair of socks that I knit last winter and sitting on top of the socks is a scissor fob that I made.  I also included a package of rainbow colored pins and some note cards and a journal by Mary Engelbreit.  And last but certainly not least, a refrigerator magnet with the Canadian flag.

I love to participate in swaps.  It’s a great way to ‘meet’ people with a common interest and from all over the world.

Wow Kaaren, you really are so very talented. I love everything you made... your swap partner is one very lucky lady! :-)

What a delightful package of goodies sent to your partner. Sharing your talent - priceless!
((HUGS))

What a great swap gift. I'm in Ontario too so know exactly where all those beautiful red brick houses are.

What a fun swap you did. That bag is wonderful. I would love to see those houses. So charming! What a clever idea for the newspaper to put them out.

I love the pincushion of course. You did a great job embellishing it. That's half the fun isn't it?

And the socks, fob and notion box - more of your creative talent showcased. Such a lucky gal to be on the receiving end of a swap with you my friend!

Way cool! Your swap partner was so lucky to get all of your special goodies. I so love that pincushion! You are one talented lady with all the pretty things you make.

I love everything! How did you make the dressmaker form pincushion? Is there a pattern? I love it!

Well, looks like you spoiled your partner! She's very lucky to get such a nice gift.

Wow Kaaren, So many goodies. Your partner is very lucky!

Wow! What an awesome package. I'm sure you made Sandi's day. Each of your projects are so beautifully made.

Wow - Sandi must have been so happy to receive all of your wonderful swap gifts, Kaaren! I love the pincushion - what a great way to used spent thread spools!
Cheers!

I envy your swap partner! Your wonderful items are "the bomb" as the kids say (I can just see my daughter rolling her eyes when I say things like that LOL!)

Lots of neat stuff you sent to your partner.

Oh Kaaren, you are so talented, she will love everything you sent. If I opened that and was not feeling well, I would then feel great!!

Kaaren, you are a jack of all trades. Knitting, painting, sewing and I love the pincushion. Very cute.
Keep Stitchen'
Bonnie

What a great swap partner you are !
Micki

yet again, a beautiful job kaaren. such a generous and thoughtful package to send.
i'd love to see some shots of those pretty houses on your blog sometime?
enjoy your weekend, and again....thank you for my lovely surprise!
big hugs,
julie xoxoxox

What lovely goodies thee Kaaren. YOu partner is a lucky girl...hugs Khris

Kaaren - Love your pincushion! I am sure your swap partner will be thrilled with the lovely package you have made.