It is such an awesome feeling to know that there are some very amazing people out there in blogland.  It seems like every day something happens that either brings tears to my eyes or has me shaking my head in disbelief.

Several weeks ago, Edie (no blog) from Texas wrote to me about my needlecases and we started to communicate.  Without going into too much detail, we started talking about x-stitching and I had mentioned that while blog surfing, I had seen a needlecase stitched by the Blackbird Design gals from their book, Thank You, Sarah Tobias that I would ♥ to stitch.  Edie mentioned that she too wanted the same book and told me that she would ask about it at her local needlework shop.

She did just that and was told that the book sold very quickly and was out of print and that she would keep her eye out for one…just in case.

A couple of weeks later, I received an email from Edie asking for my snail mail address.  Unbeknownst to me, Edie had attended a retreat and it just so happened that the Blackbird gals were teaching there.  About a week later when I went to pick up my mail…well, you guessed it… 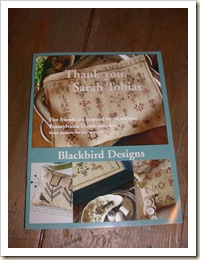 This was waiting for me!  Be still my ♥.

I can’t recall exactly how Susan and I started chatting, but we also started talking about stitching and how it was a dream of mine to stitch a sampler one day.  Susan told me that she loved to x-stitch and linked me to a few sites where I would find some free sampler patterns.

Well one thing led to another and I sent Susan some off cuts of fabric that I had in my stash for her aspiring Baltimore quilt and she told me that since she knew that I love pincushions, that she would make me one.

I went to the post office today because I am expecting a few things and guess what was there waiting for me?  A little package from Australia. 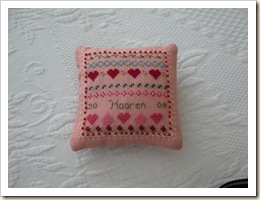 The most awesome sampler pincushion I’ve ever seen!  The photo does not do it justice.  The stitching is exquisite and the little red dots around the perimeter are individually sewn beads and just beyond the beads are the tiniest French knots.  My heart is still pounding.

Random Acts of Kindness…RAK’s…is there anything more ♥ wrenching?

Edie and Susan, you’ve both touched my ♥ more than you’ll ever know.  Thank you both sooooo very much.  And before I start to blubber (Mr. Painted Quilt’s word), I’d better end here.

Oh my gosh -- Kaaren, I start my day with a visit to your blog which is always inspiring, positive and more than generous! Thank YOU for all you do. Hugs, Edie in very very hot and very very windy (good to stay inside with the A/C stitching!) Texas

how very sweet of these girls. obviously they know the worth of your friendship kaaren....to me it's worth more than words can say.
biggest hugs,
julie xox

I'm always amazed at the kindness of those we've never met. What wonderful friendships we're making worldwide through a little thing called a blog. You're very deserving Kaaren and anyone would be thrilled to know you.

Your post confirms once again that blogging friends are simply wonderful, caring and giving! At times I think so much better than my "live-time" friends.

Hey Kaaren, for friends without blogs of their own you can refer them to our group quilting blog we have started. It is for those who don't want to maintain their own or who don't think they would write enough for thier own. We are a great bunch and more are welcome to join. Right now we are having an "Ugly fabric" contest. And we love your blog! Thanks!

How sweet of your new friends. Its amazing how generous people can be.

What wonderful mail you received from bloggy friends. That pincushion is adorable.

You deserve it!! You're such a gorgeous girl!!
What lovely girls...
Ah it does the heart good to know there are special people around.

What wonderful RAK's. Those givers were very thoughtful indeed! That book looks amazing!! And the pincushion has wonderful details. We know you can never have enough of them!!

It is simply amazing how many good and kind people there are in blogland. I can't imagine not being in it now!!

How very sweet! What kind and generous crafters!

Blogging has brought about amazing friends. I count you as one of my friends and your words of encouragement are valued. Thanks

Wonderful surprises! I can't think of anyone more deserving of Random Acts of Kindness than you, my friend.

I don't know what it is about 'blogging friends' but they sure are special, aren't they?

I am so happy for you Kaaren...one reason I love blogging is because you do see so much kindness! Enjoy that pattern and pincushion!

What great surprises. Bloggers seem to be among the most generous, kind people there are!!

Everyone who has commented before me has pretty much summed up my feelings, too, Kaaren! I love our blog world and the people in it! What a gorgeous pincushion - and just cover on the book makes giddy! Have fun with your new treasures!
Cheers!

Our blogging world is full of so much love and kindness...I sometimes wonder how I could spread it even farther.....I am so glad that you smiles were brought to your face and to your heart!

It is amazing how people from all over the world can become the best of friends and the RAK never ceases to amaze me. What lovely gifts you have received!

So nice of them to surprise you with these awesome gifts!! Enjoy!!

Doesn't it do a heart good to know how many kind people there are in the world? Wonderful and sweet gifts!

It's wonderful that you have made such good friends through your blog. You deserve it all!
Micki

How wonderful for you Kaaren, you deserve it. RAK is such a wonderful thing, there truly are great people out there. I'm so glad to be a part of the blogging world to meet great & wonderful people from all over the world.
Beautiful little pincushion.

That warms the heart. What lovely gifts and surprises you got.

How sweet! Lovely gifts for a lovely person!

You got wonderful presents! Passed by to wish you a fine weekend. Here in Italy it's realy hot!!! We refresh with a cold shower and tonight dinner outside with a glas of white wine! Mail you next week! Hugs, Renata.