I am truly driving the gals in our little post office absolutely crazy…and I love it! They used to be amazed at how much mail I received from the states but now they consider that just ordinary and run-of-the-mill.

So yes…Italia…a most beautiful country with so much history. It’s been about 25 years since I was there. Too long, I’m afraid.

Bear with me a moment before I show you my goodies and allow me to share a bit of my dh’s humor. When I returned from the post office, he was in the kitchen with his head in the refrigerator when I came in. I told him I received a parcel from Italy that I thought might be my CIJ swap gift, to which he replied, “Good. Do you think it might be spaghetti? I’m starving.” I could have killed him. 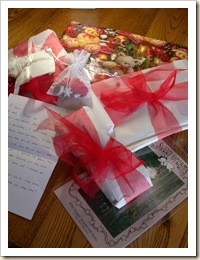 Such pretty packages, all tied with red ribbons and a personal note from Renata telling me about the gifts she made and how she’s been following my blog since I was assigned as her partner but didn’t want to leave any comments until after I received my gifts. 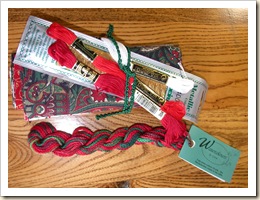 The first package I unwrapped contained some floss and Christmas fabric. 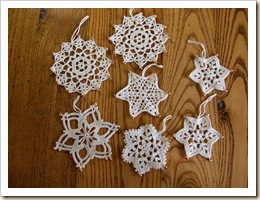 Next were these awesome crocheted tree ornaments. Can you see the gold beads on the tips of each star? 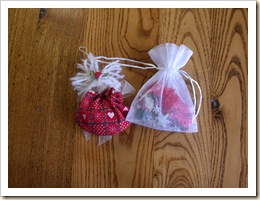 Then there was an angel ornament and a little sack filled with rick rack, Christmas confetti and buttons…and 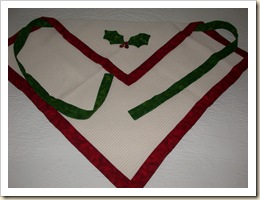 a Christmas apron made from waffle weave fabric…and 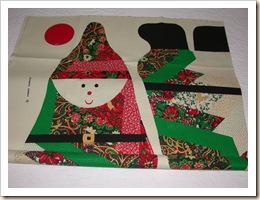 Don’t quit on me yet because there’s more! 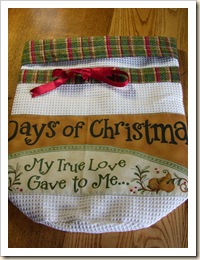 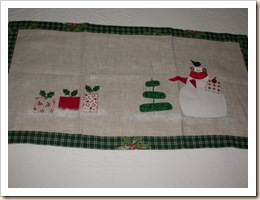 Thank you so much Renata for your wonderful gifts. They will always have a special meaning for me, especially around Christmastime.

I would also like to extend a special thanks to both Stephanie and Linda for hosting this swap. Their organizational skills and professionalism were/are outstanding. I just can’t imagine the task of keeping all of us women in line and on target.

So having said that, when’s the next one? (wink)

How fun to have such a Christmassy gift in July!!! I think it is great to think of the holidays now so you have time to do things. No stress. It must have been like Christmas morning opening it all.

When I started reorganizing my quilt studio this weekend, guess what one of the first things is that I did? Yep, set up the little 3 ft. Christmas tree. Now I have it there year round.

Oh wow, such beautiful gifts!!
What a fun package to unpackage...enjoy :o)

What a very sweet package from Renata. Oh my those crocheted ornaments are to delicate. What a cute bag! Love how she used waffle weave. Mr. Painted Quilt has quite the sense of humor doesn't he?

More wonderful goodies. It really is Christmas in July in your house - what fun!! Just another affirmation that there are so many good people in the world and the best of them are blogging now. Enjoy your treasures!

Cute pkg from Italy but must admit that I got a chuckle out of your husband's comment...sounds like something said in our home!

What gorgeous gifts and I agree the crochet is stunning.

Kaaren -
OMG girl - you've been to Italy? I'm so jealous. I would love to travel. Anyway, your CIJ looks like a lot of fun. Thanks for sharing.
Faye

Your DH's quip sounds like something my DH would say - LOL - I almost spewed coffee.

I laughed out loud at your hubbies comment - I'm pretty sure it's something Mr. Farmhouse would say as well. What a wonderful package of goodies you received in your swap. I never find out about these swaps until there done. This one would have been fun.

lots of lovely treasures for a lovely gal...perfect!

Kaaren, you made me laugh, because food is a very big subject in my house too :-) The roof could be falling in, but they want to know what is for dinner! Great swap gifts. Looks like you have had some wonderful swap partners.

Oh such beautiful and thoughtful things!!
Men, what can you do LOL!!!!

Such a wonderful and thoughtful parcel from Renata. It seems your dh has the sense of humor, thinking of his stomach.....So glad you enjoyed the swap.

Hi Kaaren, I'm so glad you like the parcel! I realy had the idea to send you a big pizza in this package but then I realized someone would have smelled the food and so you recived only some crumbs! Some recipies are coming next week, so your dh will be satisfied too! Hugs, Renata.

I love your hubby's comment - I think he and Mr. Squash are "distant cousins"!! What incredible gifts from Renata! The snowflakes are so gorgeous as is everything else!
Cheers!

What a great package to have received! The crocheted ornaments are so wonderful!
Mr. Painted Quilt -- well, what can one say? Sounds like something I'd hear around here!

Ha ha, I love your dh's sense of humour!! Beautiful gifts, thanks for showing us xo

Sounds like many of our dhs have the same idea about eating. Great gifts from abroad.

Very nice gifts. Those are so sweet and it makes it wonderful for them to come from all over the world. You are one lucky gal!

what cool presents! but what i really wanted to write was that your lemoyne star is stunning! and you keep saying you're a new quilter--that's a hard block to master--good for you! i made one years ago in a class with Sharyn Craig but wouldn't dare attempt one anytime soon without lots of practice! good for you :-)

Man, it sure was Christmas at your house. Such a great package you got.

what nice goodies from Renata. love her use of waffle cloth. and your husband is very funny.