What Did I Do When Computer-less?

Eat?  More than I wanted to.

Read?  A little but found it very hard to concentrate.

Call AOL?  At least 6 times asking where my modem was.

A couple of weeks ago when reading the Blackbird Designs blog, Barbara and Alma offered a free quilt pattern which I just fell in ♥ with and promptly added it to my ‘to do’ list.  I stand to be corrected but I think the block is the Lemoyne Star.

When my modem died, I knew that I would be without my computer for at least a week.  It was then that I decided to proceed with the quilt top.

The design had a vintage feel to it and that’s what probably attracted me to it initially.  I wanted to maintain that look in my version.

The Blackbird quilt is made from a jelly roll and since I didn’t have one, I decided to use some Thimbleberries fabric from my stash.  I adjusted the individual square size from 2 1/2” to 3” and proceeded from there. 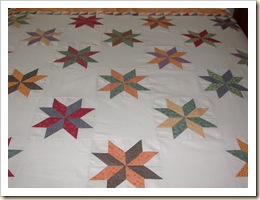 It took me three days to cut and piece the quilt and the completed top measures approximately 70” X 70”. 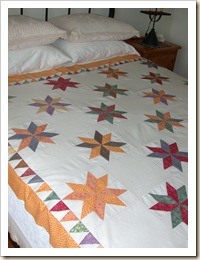 I also took the liberty to venture from the Blackbird gals rendition by adding a Seminole border but realized afterward that I probably should have added a smaller 1 1/2” border between it and the pieced quilt top first.  My inexperience reared it’s ugly head here.  Sigh. 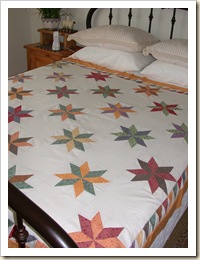 But having said that, I’m really pleased with the way it turned out.  All my points were spot on and not one block needed to be squared up.  That’s a first for me!

I am going to have it machine quilted and I can envision feather wreaths in each of the connecting blocks.  Can you offer any quilting suggestions for the pieced blocks?

Some day I’d like to make another quilt like this one using only two colors…a variety of turkey reds and white.

The positive side to not having my computer was the making of this quilt top which probably would not have happened til a much later date.

The negative side to not having my computer is I probably gained a couple of pounds simply by eating out of frustration.

What a wonderful use of your time!!
Absolutely wonderful and food??
ehh.. it's always there... love it or hate it...
Enjoy your beautiful quilt. What a fantastic achievement.
Will look forward to your finished result.
hugs
Robyn xx

Look what you can accomplish without a computer! Wow, what a beautiful quilt. You were one very productive lady.

My word verification is spree

Does that mean you should now go on a shopping spree?

Well except for the pounds, you certsinly got a something good done! Isn't it nice when you finish something you set out to do - even if you would re-do a few areas!

I hope you are having a great Monday! hugs, Linda

I love the borders and I don't think it's suffered at all from not having a narrow one first. It's a great top, I do love the Lemoyne star. I think if you ask the machine quilter for suggestions for the stars, she's probably got the best ideas.

Incredible use of your time! I love it, it's beautiful.

Great quilt Kaaren. It's such fun when I find a pattern that I love and it motivates me to get sewing!

Kaaren, the quilt top you made is stunning. I love the colours. And I like how you didn't add a border... I love the way the triangles play together! And they wouldn't have played the same way with a fence between them!!! :-)

You accomplished so much! But I know... how dependent we all are on technology!!! I'm sure you've said this before - can't live with it and can't live without it!

Pound for pound I know what you talking about! Lovely quilt top and yes, I want to make that one too!
Glad you are back...we missed you!

I think your quilt is lovely just the way it is. You were speed sewing to get it done in 3 days!

Great looking quilt top! Even in the photo the lines are clean and crisp. You got some talent there.

See... that was a good thing.. and we are all here when you got back..lol..
Just love your quilt and it was very well spended days!!! Thanks for showing us.. so we might turn off the computers and start sewing..lol..!!!

Oh,what is a few pounds, look at the quilt you made, it is wonderful, maybe my computer should "die" for a while too!!

Your quilt is lovely and you are right, it has a nice vintage look to it. Excellent way to mark your time while waiting.

Great way to make use of the time without your computer!!! I love LeMoyne Star blocks -- stitching them is so much fun!

What a lovely fresh looking quilt Kaaren...and you made it so fast...it lookes awesome..love the Timbleberries fabric ...and i am computer hooked too..what is the point in making beautyful creations if you can,t show it off like we do in our blogs...i live here in a small village where no-one is patching or quilting...the first thing i do when i get home from work is relaxing at the computer and bloghop to see al those lovely creations..it gives me inspiration...like your quilt now...i have saved the pattern from bb designs..glad you are "online"again..your blog is one of my favorites..
greetings Francien

Wow - it's gorgeous, Kaaren! I'm sure you worked off those couple of pounds while you made the quilt - right?!!
Cheers!

Wow, so that's what can be done when there's not computer calling out to you? Hmmm, maybe I should try venturing away from it. Like NOW! LOL

I am so impressed. You started & finished a whole quilt top! It's a great pattern and it will just come to life when it's quilted.

I Love it!!!
I have gained a few pounds too and I don't have any excuse :o(

I too would accomplish so much more without this computer but I'd miss my friend!

How pretty! I don't think it needed a small border first. Having the triangles right on the pattern gives it a much more vintage look I think. Had you added a small border first, it would have looked very 2009 instead. Great job! Now can you zap my computer so I can get something done...lol! I bet I should not have said that right? I might have jinxed myself. :-)

Good and bad not having a computer. The quilt is very good. Eating not so good. I have a tendency to do that too when I am frustrated.
So glad you are back on line.

When you don't have the computer it's amazing what gets done. Your quilt is just yummy - love it. Maybe I should have hubby take the laptop to work with him, oops that still leaves the desktop upstairs - oh well, lol.

Looks like you accomplished a lot! I love that quilt and also have plans to make it! I love the vintage feel it has as well!

Well we are glad you are back. And this quilt is so lovely we all forgive you.

Isn't funny how we are so attached to our computers/internet?
I love the quilt you made while you had your down time!! It turned out quite beautiful.
melissa

What a great quilt to accomplish during "computer down-time"!!
You can be proud of yourself.

I couldn't live without my computer, as I am connected to friends that way . Love your quilt!
Micki