Last Friday morning when my friend Lucie and I were solving the problems of the world over a cup of tea, she brought out a papier mache box and asked me if I could find a use for it.  Immediately, I had a vision and when I got home, I sketched out a pattern and got to work. 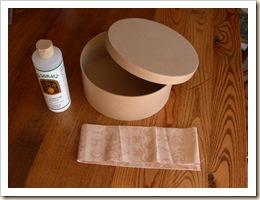 I knew the fabric that I wanted to use for the sides so I went to my box with leftover scraps and found exactly what I was looking for…a piece of fabric with a stitched sampler design from Moda’s Madeira collection.  I trimmed the fabric to the width of the box and added a little extra in the length to allow for some overlap.

Whenever I apply fabric to either wood…or in this case, papier mache…I use a water based varnish which is readily available at most craft or hardware stores.

Note: I have tried petroleum based varnishes and they just don’t seem to work for this type of application.

At the outset, I would recommend wearing rubber gloves if you are going to attempt this as it can get kind of messy.

I liberally spread the varnish on the surface to be covered using a sponge brush and then smoothed out the fabric over the ‘wet’ area.  I then spread the varnish over the top of the fabric as well and smoothed it out again to ensure that there were no bubbles lurking beneath the fabric.  At this point I made sure that all the areas were covered well with the varnish and that there were no apparent ‘dry’ areas.  I then wiped off the excess drips of varnish with a dampened paper towel and allowed it to dry.  I set mine out in the sun on the deck and it was dry in less than 15 minutes. 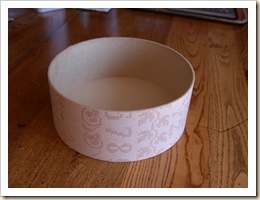 While the box was drying, I traced the individual elements of the pattern that I had designed onto a sheet of ‘Steam-a-Seam 2’ using my light box.  If you don’t have a light box, you can achieve the same results by tracing your design against a window during daylight hours. 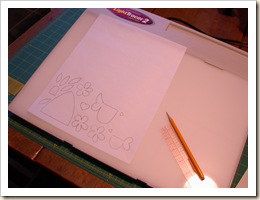 I then painted the inside, lid and underside of the box using a colonial red color.

While that was drying and curing, I ironed the cut out shapes of ‘Steam-a-Seam 2’ to the appropriate wool, cut them out, then ironed them onto the background fabric and began to stitch them in place using a blanket stitch.  In this instance, I used wool on a wool background.

After the stitching was done, I decided that it was going to be a pincushion. 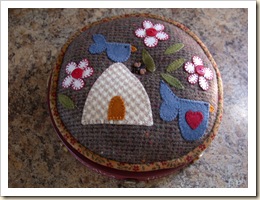 I sewed some binding around the outside edges and used the same fabric to line the inside of the box.  I cut a slit in the underside and stuffed it with polyfil and then stitched the opening closed. 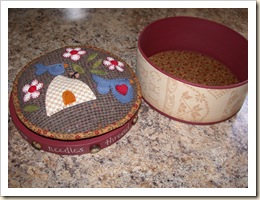 I then painted some appropriate sewing ‘words’ around the rim of the lid e.g.. needles, thread, scissors, etc. and glued buttons between each of the words not only to separate them but to also add a little bit of interest and dimension. 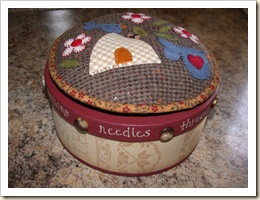 Did you notice the little ‘bee’ button in the center?  I used that to attach the pincushion by making a little hole in the center of the lid through which I pulled the thread that I had used to attach the button and tied it to the underside of the lid.  I didn’t want to glue the pincushion to the top, just in case I want to change it out for another design at a later date.

And that’s what I did on Friday afternoon and part of Saturday…along with playing in my garden!

It's just wonderful. You have such good ideas and especially to add the top as a pincushion! I love it.

wow chooky! that turned out so beautifully. that mind of yours must work overtime to come up with all the fab things you think of. time for some serious thought re pattern writing i think!
julie xox

Oh my, that is gorgeous!

Well if that isn't the cutest and most clever pincushion I've ever seen! I just love it.

Kaaren, such talent you have. You description of the process was great...it kept me reading all the way to the end. Thanks for sharing. *Sherie*

Now that is a PINCUSHION with class. I love that you used the varnish to adhere the fabric. I love that stuff and use it a lot but never thought to use it this way! I have to make sure my mom sees this one. I can't wait to see what is next!!

This is so adorable. I would have never thought to attach it with a "button". Great idea.
Teresa

This is my first time reading your blog and I just love this pincushion! You're so creative! This would make a wonderful gift for for someone who sews or quilts.

OMG, OMG, OMG, Kaaren you are absolutely amazing! It's the cutest, sweetest and most adorable box I've ever seen. I wonder if I can do that? HMMMMM Thanks so much for always being so willing to share you talent.

Adorable!!! Thank you as always Kaaren for sharing your knowledge and inspiring all of us with your amazing projects.

How cute!!! You are so creative...love that you made the top a pin cushion.

Oh My that is absolutely the cutest box!! You are so creative :-)

It's wonderful! What a great idea for another pincushion...and you can store things inside! The wool design is absolutely beautiful!

Yes! I noticed the bee. This is so cute Kaaren. How crafty fun. I'm amazed.

Kaaren, Your sewing box with the pin cushion is "out of this world" wonderful. I thought the pinkeep was beautiful.....but this is right up there with that! You are a terrific inspiration to all of us out here.
Thank you for sharing this great project with us. I truly appreciate it.

Wow! Your sewing box came out beautifully! I love to see what you are doing!

How cute. what a great idea to use with your paper mache box.

Oh that is so cute. Great idea. I love it.

Kaaren,
I love this. Are you suppose to love a pincushion. Oh well, it is so cute. Gotta make one these. Thank you so much for this tutorial.
Keep Stitchen'
Bonnie

Me again, I forgot to tell you when I come to your blog in the morning, I sing & hummmm your song all day. Isn't that funny.
Keep Stitchen'
Bonnie

Wow! I love your new sewing box!!! What a fabulous job you did. I am inspired to start lining my wooden sewing box but still want to wait until my French letter sampler is ready for the top. You make me want to stitch it night and day.

Oh my goodness, that is stunning!
What a fun thing to have created!

Oh, this is so cute! I would love to have one of those. I just ordered a pattern a couple days ago that uses fabric on this type box. I don't know what process is used.

Oh Kaaren you are so funny, you think nothing of taking a plain box and turning it into a masterpiece!! You are so very talented!! I would have ending up with a glob of wet and sticky fabric!!

I love it. Such a great idea. It looks beautiful. Thanks for sharing!!!!

Adorable!! you are a hit on the blogs I have read a few that are refering to your blog and the great tutorial well worth the visit Kaaren...I just love your ideas and your projects you are really one talented lady

You have completely inspired me!
Thank you for the easy-to-follow tutorial, and for the eye-candy of what is your beautiful project.

Well Kaaren...I am here for the first time on your blog..spent almost an hour here reading almost everything you have posted...enjoying very much the music...brings back memories..and what a beautyful...inspirationel blog it is...what a great projects you make...thank you for the pincushion tutorial..love it..I am going to be a follower of your blog if you dont mind...there is somuch to learn for me...
greetings from Holland
Francien.

that is just too cute. love it.

Kaaren, you are so inventive. I never would have thought of doing all that. And to attach it with the button; you're very talented!

Oh my goodness that is so adorable - great job and a very creative idea.

I love this cute idea! Like I need one more pincushion, though it is helpful to have one at each place that I may be. Yours is so adorable and useful!