Yesterday was my favorite day of the week…market day!

People come from far and wide to shop at the Annapolis market.

We were there bright and early…so early in fact, that some of the vendors were still setting up their booths when we arrived shortly after 8 a.m. 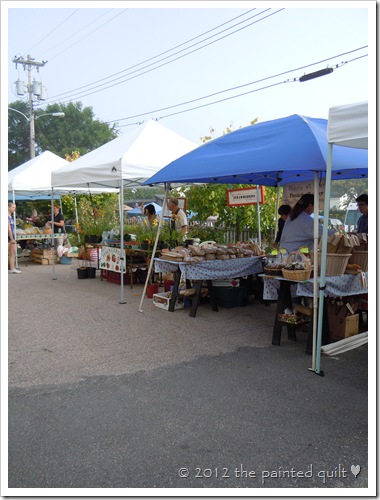 The market is quite large for a small town and there is always a great selection of fresh produce, bakery items, antiques and hand made treasures. 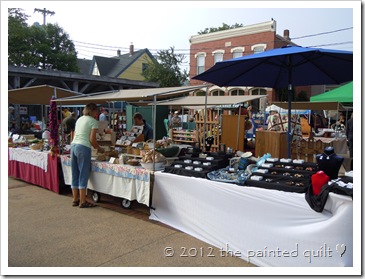 Cliff is renowned for his eclectic selection of fresh fruit and vegetables at very reasonable prices…and he even makes and sells his own maple syrup in season. 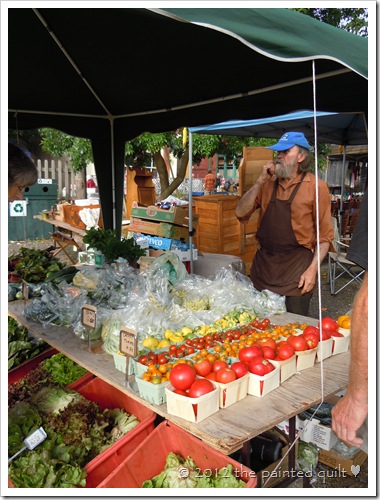 Our larder is full! 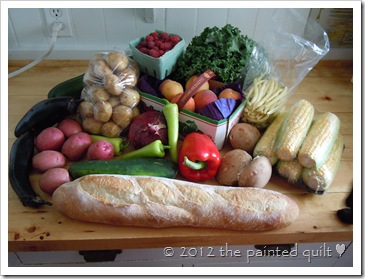 We love fresh veggies, so I decided that we would have grilled roasted veggie sandwiches and corn-on-the-cob for dinner.

I sliced the eggplant, mushrooms, red onion and red pepper and laid them out on a large flat pan.  After drizzling some olive oil over the veggies, I added some fresh ground pepper and baked them at 350F for thirty minutes. 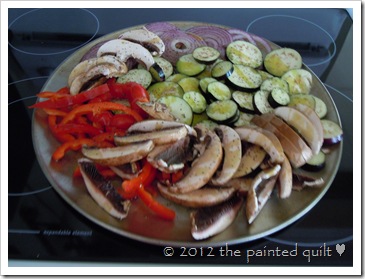 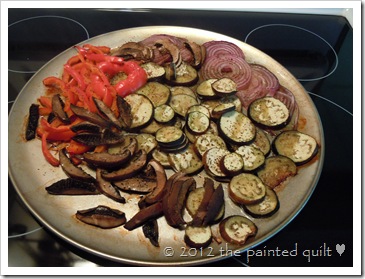 I then sliced 4 focaccia buns in half and started to layer the veggies. 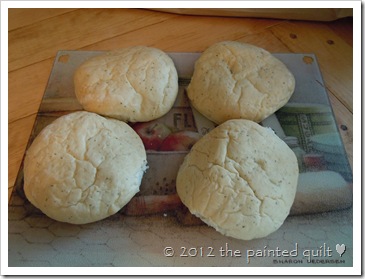 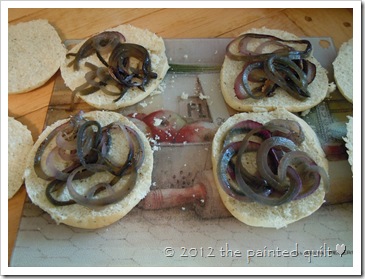 followed by the mushrooms, red pepper and eggplant. 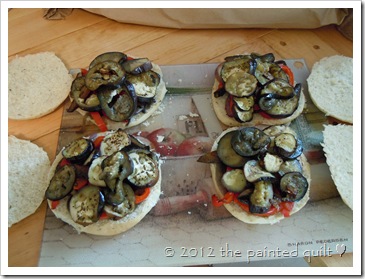 I then topped the stack of veggies with some sharp cheddar cheese.  (I used cheddar but you can substitute the cheddar with any cheese that will melt when heated.) 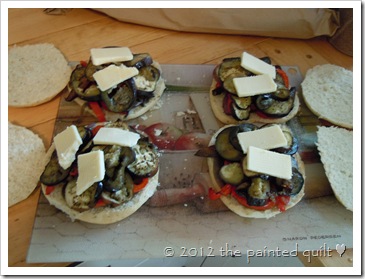 Ten minutes on the ‘George Forman"’ grill will do it. 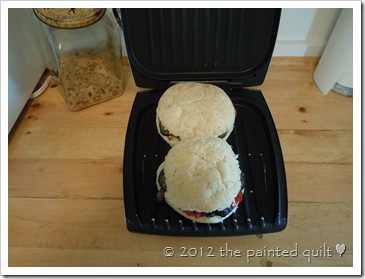 And voila…a perfect dinner for a hot summer day.

It was so good that we’ll be having the two leftover sandwiches for lunch today! 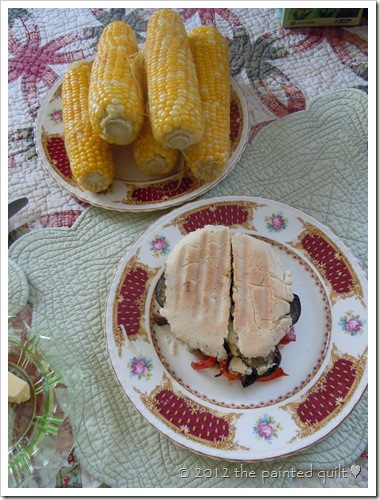 Remember those raspberries I bought?  I made two apple-raspberry pies for dessert…just in case you decided to stop by! 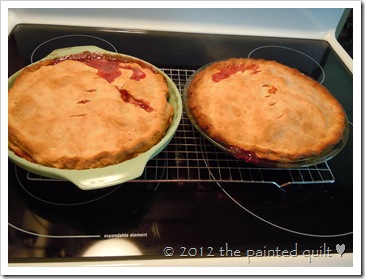 P.S.  Thank you all so much for your comments and suggestions regarding my PC/Mac dilemma.  I’m going to take the plunge and buy a Mac.

That looks so yummy, I do miss being able to use cheese, really love it.

I love a good farmers market!

A good day at the market and even better dinner.

Oh am I hungry now - that looks wonderful!

Oh my goodness... you made me so dang hungry for some fresh veggies now! :-) That looks like a wonderful market!

Ok Miss Kaaren, I think it's time for you to open a diner! Those sandwiches look delish! And don't even get me going about your pies...you definitely would win the prize for pies...at least, assuming they taste as good as they look...giggle!

Yum! My son went to a farmer's market in Dallas and found a 2 day old kitten in a flower pot. Apparently the farmer had brought him from the farm. The farmer said he was going to put it out of its misery so Jason took him to the vet and now he's a big, happy, healthy cat! I can't believe you didn't bring some of those huge tomatoes home. Thanks for sharing. I can't go right now to our market because it's 98 degrees at 7 AM and 110 by noon! Thanks for sharing!

Market Day (called Food Fare's here in the South) are also one of my favorite days! The fresh produce, wild flower honey, flowers, goat cheese--I could go on and on.

I think I am almost as excited about Ollie as you! They are not just pets--they are a part of our family.

Typing from my Mac--one of my better decisions.

Apple Raspberry Pie? Sounds wonderful. Have not done that combination before.

Gosh I'm hungry. Everything looks so yummy. I will try the sandwiches, great ideas.
Tink and I are so happy about the new arrival. What a lovely family he will have.

Fresh raspberry pies...my favorite! Wish I lived closer Kaaren, I'd stop by. I think I may try a grilled vegetable sandwich...looks delicious!

I just love going to our farmer's market. Such yummy stuff! I always feel good about what I eat when I shop there. In the summer I hardly set foot in a grocery store.

Kaaren. If you weren't so darned far away, I would come over for some of that pie :)
Everything looks delicious! I have a George Forman grill also and I use it almost everyday. I grill wraps that I make for our lunches.
Janet

Your buns look great!
Never thought of using raspberries and apples together. I have both right now. Do you have any special recipe?

drooling at the mouth. Tasty and sweet food, and so fresh. How did you manage to take the time to photograph it :)

I have never heard of apple raspberry pie. Sounds interresting. I can't wait to see lots of pictures of Ollie.

Hi Kaaren!
I came across this site, they have links to free quilt patterns, this one is by Jo Morton! Lots of reds!
I thought you would like it!
http://www.ladyfingerssewing.com/freepatterns/CrimsonBouquet.pdf
Take care, Leslie!

Wow, I got to blog reading too late today to take you up on the invite; back to Halifax this evening and then NB tomorrow. Did go by the market in Wolfville on Saturday and the offerings looked wonderful so I was wishing we still camped and I had some way to cook. Virtually enjoying your dinner, yum.

My mouth is watering!!!! Those sandwiches look fabulous.

This is a big week for you guys. I can't wait to see the pictures.

Oh boy is my mouth watering! Everything looks delicious!

I just love farmers markets..... I love seeing who "grew" my stuff and talking with them about it. Thanks for the heart warming thoughts on the loss of our pet.

Yummo and I was eyeing up those beautiful tomatoes on the stall. The vegie feast looks fabulous.

I'll be over for leftover sandwiches for lunch too. Since you already have dessert made I'll bring a fork!

I want to try roasting some veggies in the oven now! Looks wonderful!

Apple-raspbery pie~yummy!! I grew up always enjoying apple-blackberry crumble. Oh dear, now I'm hungry!!
Fredericton,NB has a great farmers market on a Saturday morning if you're ever in the area. Go early; it is so so busy!

I LOVE my MAC!!! I cannot imagine having any other kind. Totally addicted. And I love your days to Ollie count down. I doubt Frankie is doing that.....