Although it started out damp and overcast today and is sunny now, yesterday was absolutely gorgeous.  The Painted Quilt household has definitely been bitten by the Spring Fever bug!

Last week, Mr. PQ and I visited several garden centers on a quest for new plants.  The landscaping around our 175 year old home has been sorely neglected over the past 5 or 6 years and as soon as the weather cooperated, we began the outside work.  Mr. PQ dug out some sorry-looking, overgrown Mugo pines and spirea and I did a lot of severe pruning to some holly and euonymus shrubs.  We are hoping to replace those that we removed with some native Nova Scotia plants as well as several different species of rhododendrons, magnolias and azaleas.  We moved from a hardiness Zone 3b in Ontario to a Zone 6b in Nova Scotia which means I’m in seventh heaven in that I’ll be able to enjoy plants that would never have survived in Eastern Ontario.

Here’s my very first rhododendron, a pale yellow bloomer called ‘Nancy Steele’.  The large buds haven’t opened as yet but give it another week or so and it should be in full bloom.  The foliage remains green and stays on the plant during the winter which makes for some beautiful winter garden landscapes.  Rhodies are very prevalent in Nova Scotia and I can’t wait until they are all in bloom. 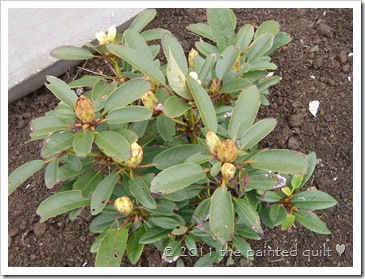 One side of our house remains in shade all day so I had to plant a few of my favorite spring bloomers that thrive in the shade…bleeding hearts.  I just had to have one of each…a red one… 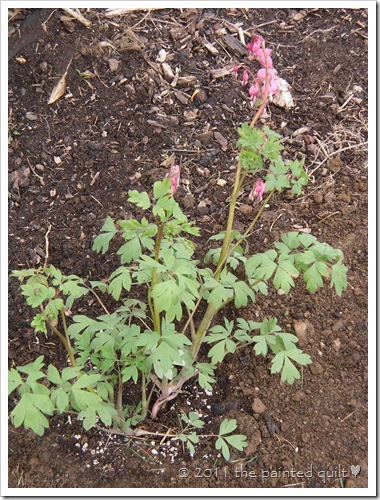 And a white one to keep it company. 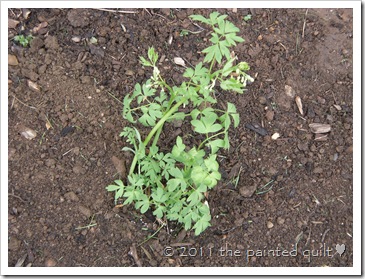 I alsoplanted a French lilac.  This particular species will produce dark purple flowers outlined in white.  It doesn’t look like much now but I’m hoping that it will produce a few blooms this year. 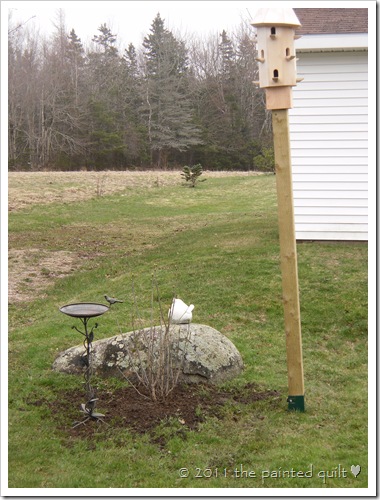 Of course Mac had to supervise the whole time.  He just loves to roam the property while we are outside working. I don’t know whether you can see it in this next photo but the deer have eaten the foliage on the tulips almost right to the ground.  These tulips were planted in the field behind the house in a naturalized fashion and not in a designated flower bed.  Oh…and they also ate the crocus blooms as well.  *sigh* 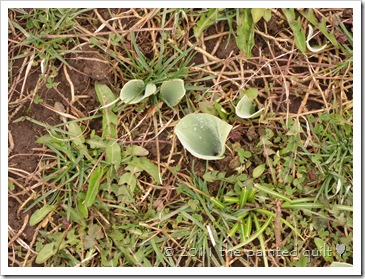 I ran out of gas yesterday and today I’m preparing Easter dinner so tomorrow I’ll plant the other rhododendron and three blueberry bushes that are patiently waiting to take up residence at their new home. 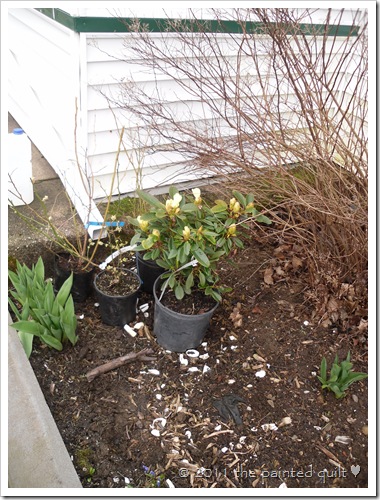 There’s a lot more outside work and planting to be done but I want you to know that I’ve also been doing some sewing as well.   I just couldn’t resist and recently signed up for a needlecase swap.  I can’t show you anything just yet because my partner and I decided that we would surprise each other but I’ll be sure to post what I designed and made as soon as she receives it.

My house still needs plants, they seem to die off, after a few years, so time to redo the beds. I hope you and your husband have a wonderful Easter.

Lucky you to grow bleeding hearts. I can't count the number of times I've planted them, but they never come back for me - not sure what the problem is, but it makes me sad.

BTW - I sent my mailing address to the button people right away, but haven't received anything yet -is it too soon to start worrying?

I absolutely love bleeding hearts. It is a very unique plant. My grandmother had one that bloomed every year in her flower bed ..so I have to have one. So far, my plant comes back every year, too. Can't wait to see all of your plants blooming like crazy!

Hi Kaaren: The old Experimental Farm on Hwy #1 between Kentville and New Minas has very mature plantings of both rhododendrons and azaleas which are in bloom later - the grounds are open to the public and you will love the display - you're free to wander and to take in all the beautiful specimens. BTW - azaleas and rhodies prefer acid soil so you might want to test from time to time and make sure you don't add lime. Keep the ph low. Check with coming events to see which sunday the blooms will be at their peak. Not to be missed.

Hope you had a great Easter Kaaren, hope the deer stay away from those plants you are putting in. Weather hasn't cooperated here so I've only done a little bit of outside work.

I can almost feel your wonderful fresh spring air. My grandmother had a huge Bleeding Heart bush by her front door. It was so beautiful. I LOVE them.

You're going to love your new zone, Kaaren! We are 5b and love it! I have to laugh because Mr. Squash and I have been planting many of the same perennials and shrubs all weekend! I can't wait to see your garden mature!
Cheers!

I love the Bleeding heart and have always had several plants as they spread. The deer will eat all the Hosta's

Kaaren, your house is so inviting, don't you want to come to Texas and work in my yard. It's a little hot, already. I wish I did more yard work. Maybe seeing yours might push me a little.

I can't wait to see your plants in place - especially the bleeding hearts. They are a fav.

That is so much work - but I know the outside of your home will be just as beautiful as the inside! Mac looks like he's enjoying watching you work, lol!

You definite seem to have the gardening bug. I sometimes wish I had more to garden than just my 10' x 10' deck. But as we are expecting some major work on our exterior this year I don't imagine I will have much to show.

I do have a lovely clematis called Lemon Bells that was developed here on the west coast by UBC that I'm looking to enjoy this year.

I severely pruned it last year and it wasn't very happy. I have a south west exposure so unfortunately bleeding hearts don't do well.

Our Rhododendrons started blooming in February, but remember we are considered to be in the banana belt of Canada.

Have fun in the dirt!

oh thats wonderful its nice weather for you to start working in the yard! I love the picture of Mac
he must love your new home too, lots of yard for him to explore!
can't wait to see your needlecase. I started to collect some wool, yes I caved in and started as I fell in love with these little projects and pincushions!
Kathie

The outside is as gorgeous as the inside. You must leave something for the deer to feast on right? I see homemade blueberry pie in your future. Hope you had a wonderful Easter.

I love your new plants especiall the rhododendrons we had 7' bushes when we lived in New York at our old home that was built in 1925. I know how you feel with your new old home. Enjoy

Oh the deer´s in our country are hungry, too They eat Tulips and my new rose. The beans and others vegetables are so yummy, they never comming to eat for the people. We built a big fence.
Now can the deer eat into the vincinity full.
Good luck for yor Flowers.
Happy Easter, Marita

When you were showing your lovely planting I wondered if you had a problem with deer. I hope they stay away from your new plants!!

Your plants will be lovely when they're all in bloom! When you're out and about, stop into your local barber or beauty shop and ask for some hair. If you spread human hair at the plantings the deer (should) leave it alone.
Chris

Nice progress on the garden! We can't have rhodies here because of the soil, according to the nursery garden owner. I miss my bushes from my Delaware house!