Always turn out to be the ones that aren’t planned ahead of time.

Yesterday’s forecast called for rain all day.  Mr. Painted Quilt and I are very early risers and as we were sitting at the kitchen table having our morning cup(s) of coffee, he turned to me and said…

“Isn’t this the weekend of the Vermont Quilt Festival?”

Within twenty minutes we were in the van, heading south to Burlington, Vermont.  We had initially talked about going on the Friday but after much procrastinating by me, we decided not to go.  After all, I didn’t NEED anything.  Famous last words.  Two and a half hours later, we were there.

En route, I made a short list of some of the things that I wanted to look at.  This was my third year going so I knew which booths I wanted to visit and where they were located.  We decided that Mr. PQ would head off with Mac, our Westie and come back in three hours to meet me.  As it turned out, not twenty minutes after I entered into the trade show, the skies opened up and it poured for the rest of the day. 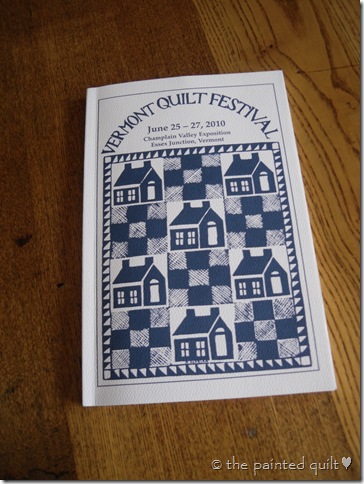 For someone who didn’t need anything, I managed to come home with a few treasures.

My first purchase was wool…lots of it! 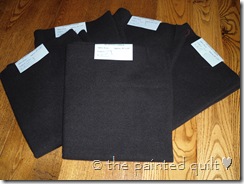 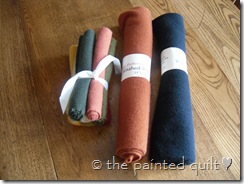 I have a really cool project in mind that will be using not only some of the wool but some of these Autumn-colored fabrics as well. 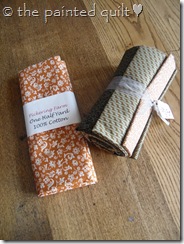 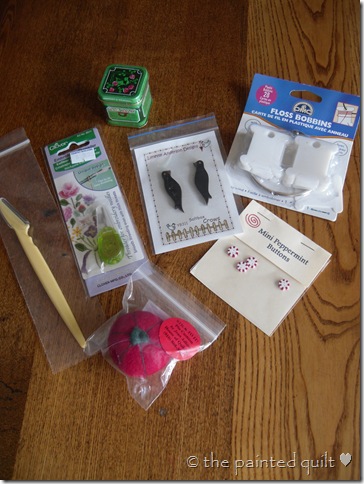 See the yellow thing on the left that looks like a toothbrush?  That’s a new-fangled seam ripper that is guaranteed NOT to cut into your fabric as you are unpicking stitches.  How cool is that!

To the right of the seam ripper is an embroidery floss threader.  Not cheap but if it works, it’ll save me a lot of aggravation.

Directly under that is a little tomato pincushion with velcro on the underside that I’m going to affix right to my sewing machine bed.

Then there are two crow buttons and some wee candy cane buttons.  I’ve already sketched out a design including the crows.  I’m not promising but hopefully it’ll be ready for September’s FFF.

Then the little green tin at the top is a container of ‘Bag Balm’, a cream that is manufactured in Vermont and used on cow’s udders.  However, it is also reputed to work wonders on hands like mine…in other words for people who love to garden but refuse to wear gloves…I’m just sayin’.

And of course how could I leave without feeding my addiction adding to my scissor collection? 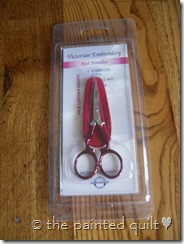 I also picked up these two patterns to add to my collection.  *wink* 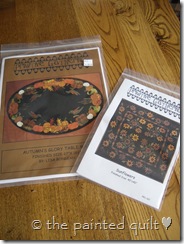 But you realize, I didn’t NEED anything!

From there we went for a nice leisurely lunch.  What I forgot to mention is that I was finished my shopping in about an hour and a half so I called Mr. PQ who, as it turned out, was waiting for me in the parking lot because it was raining too hard to take Mac for a long walk.  He did manage a trip to the book store but came away empty-handed.

After lunch we went to the Christmas Tree Shop, JoAnn’s, Price Chopper for a few groceries and last but certainly not least…exhausted as I was by this time…a quick visit to The Willow House, a country/prim shop in south Burlington, Vermont.  I could have purchased one of everything in the shop but by that time I was so tired, all I managed to take home with me were these three purple Echinacea, made out of metal and guaranteed not to need watering.  *wink* 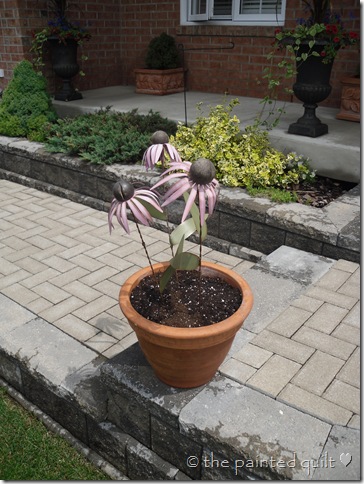 I’m planning on going to the garden center tomorrow to buy some German ivy or potato vines to add some green and to keep them company.

The flowers in the two cast iron urns are filling in nicely as well. 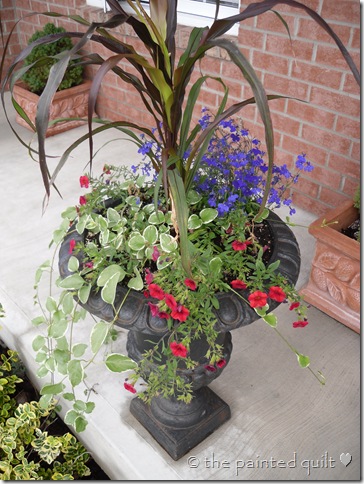 And just a little reminder that this coming Friday is the First Friday of the month.  The design is finished and ready to go and I’m hoping that you like it as much as I do.  I think it’s one of my favorites so far.

I am in love with those patterns! I have a lot of wool sitting around with no project in mind so I may have to go look up that pattern maker for some ideas. Thanks for sharing them Kaaren.

Did you just shop or look at the quilts too? :o) Now that my kind of whim!!! My mother-in-law first told me about bag balm when I first got married. Bought it at the "feed" store. Let us know about the seam ripper.

This is a very unglamorous comment about Bag Balm. It works miracles on diaper rash (my 2 pound 8 ounce granddaughter had to spend 2 months in the hospital before she could come home and they only used disposable diapers on her and her rash made me cry) and it quickly eases and heals sore butts from hemorrhoids.

A wonderful day, indeed. Mr Painted Quilt is a delightful man - tell him I said that. ;-)

I have a similar seam ripper - I was told mine was sold as an eye brow trimmer. hmmmmm - makes one wonder. :-)

This is how I am with the Jacksonville, FL Quiltfest in Sept. ea. year. I say, I don't need a thing and then I do and have BAGS and BAGS of things that I'm hauling home via car, boat, cart, 4wheeler,etc. However, it's my yearly splurge and always gets my creative juices flowing! :) Love Burlington! You have a husband like mine! :) LUCKY GIRL!

What a fun day. I like all of your goodies, especially the peppermint buttons. Looking forward to your First Friday Freebie design but I wont be getting it done the day it comes out like I did for the June design as we will be leaving for vacation next Wednesday.

Love all of your goodies!
Thanks for sharing! And how sweet is your hubby! :)

I haven't been to the Vermont festival since they moved to Burlington....

They always have such gorgeous quilts..

I wonder if the bag balm will work on heavily calloused feet (I go barefoot way too often). I may have to try this.

I was skimming your lists of purchases looking for scissors. You didn't disappoint. We do have our favorite things, don't we!
I like the crow buttons very much.

What a lovely trip and what goodies you got.. How does the threader work? Seam ripper got to be new.. I loved all the wool and those crow buttons are so cute.. I love anything crowy?? lol
Hugs
Maggey

OK - Sam is tops in my book now, Kaaren! What a guy! Oh....and you came away with so many wonderful goodies! I have the pattern and the wool for the squashes table topper, too - was hoping to start on that this year! Love that non-watering echinacea, too!
Cheers!

What a great outing! Mr. PQ is a keeper!

What's better on a rainy day than quilting all day? Shopping for quilting supplies all day, lol! Love all the treasures you found Karen! Love those crow buttons, and the metal flowers are awesome - I think I could probably keep those alive, lol.

What a great way to spend a rainy day...and a wonderful Mr PQ to come up with the idea!

How on earth can anyone resist a new pair of scissors...seeing yours makes me want some too...any kind at all!

Kaaren~
I missed the quilt festival this year so thank you for bringing us along!!! I love the drive up North, the shopping and the return trip~maybe next year....
♥E.

Oh, I love crows. I can hardly wait till September. (grin) Looks like you had a great day and got some wonderful goodies. Winona

Nothing like new toys to play with.
How could you not buy some goodies I don't think 'need' comes into it you don't know precisely when you need treasures like patchwork goodies.lol
cheers
Marina

My Dad always said "need and want are two different things, Janey do you need it or want it"? I always WANT it!! Bag Balm is the best and not only for hands, it works wonders on little ones seats!

I enjoyed you day trip and your purchases too! Thanks for sharing a wonderful day!

I just love all your new "goodies" and you did do a great job in picking them all out--and in only an hour and half---I would of probably been there all day!!!!!!!
I do so want to find more felt myself--but they want sooo much for it on the internet--at least the ones I have found that carry it so far--I will keep looking!!!!! Love your flowers too--great gardener you are!!!
I did two dish towels with Junes design on it for my Christmas stash--thanks! Hugs, Di

Glad to hear you had a lovely day, despite the rain :) I love the echinacea....very drought tolerant...lol....!!! Happy crafting, Jenny

I'm exhausted just by reading about your day! Love those spur of the moment trips. You got some great stuff and I love the Echinachea...my kind of plant!

What a great day you had and you didn't buy much. Could you please let me know the name of the seam ripper and the thread thing, than I can search the web for it.

What a wonderful little trip.....even if it rained. And to go home with floweres too.....
Have a great week.

Despite the rain it sounds like a fantastic day!!

I've never stopped at the idea that I didn't need something - I always need something - we all do. You got some great things at the show - I'm especially interested in that seam ripper. I've put holes in a few things with the other kind!

What a fun day...look at all that wool!

It sounds like you had a wonderful day and came home with many goodies. I love sissors too.

What a wonderful day that sounds like -- rain notwithstanding. Your metal flower is amazing -- you do find the most amazing treasures!

I Love your blog ! You have so many beauitful quilts & etc.This is my first time on this one ,I will be back !