A Surprise in My Mailbox

I hadn’t been to the post office to check our mail since Thursday of last week so when I went yesterday, there was a card in our box indicating that there was a parcel inside waiting to be picked up.  I couldn’t remember having ordered anything so whatever was there was going to be a surprise.

And surprised I was! 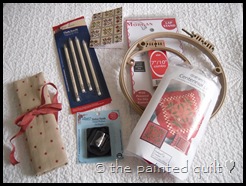 I would have been happy with just that but Ranette really spoiled me by including a few extras…like  the punch needle stand, a French General scissor case (Ranette too is addicted to collecting scissors), a set of four Fons and Porter chalk pencils and an antique reproduction silver thimble.  Yikes! 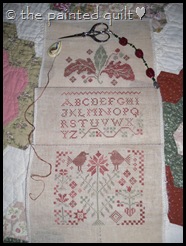 The third pocket of my BBD needle case is now completed which leaves only one more.  Barring any distractions, it is my goal is to have the entire project done by the end of the weekend.  It’s slow going for me because I’m a real newbie when it comes to x-stitching and this project was my inspiration to learn.

Samplers and anything with a vintage look just capture my ♥  and this design incorporates both.  What I also♥ about this design is the fact that it is not totally symmetrical, making it so much more pleasing to the naked eye.

Having said that, time’s a-wasting and there’s work to be done.

You'll certainly do the needlepunch project justice just like the beautiful needlcase you're making. Obviously a work of love.

Congratulations on the goodies you won. It looks like a lovely stack of fun.
I'm drooling over your X stitch!! It is absolutely wonderful!! Nice job and so prim!!

Congratulations on your win! Have fun needle punching. Wow!~ your stitching is gorgeous~ that is going to be a beautiful case! Have a happy day!

Your needle case is certainly coming together well. I put my pattern book away as I just don't have time to start the project for a while. I will just have to enjoy seeing yours.

Such a great package you received. Nothing better than presents in the mail, nor a gift that everything in it so you're ready to go. I haven't tried needlepunch yet, but you're right - it looks like a miniature hooked rug!!!

And your needlecase is looking wonderful!!! I'll bet you've probably got another project in mind after this one. It does get addicting. Can't wait to see it all finished off!

I love punch needle so I know you're going to have a ton o'fun with that project from Ranette.

Look at your fabulous needlecase - it takes my breath away, Kaaren. You've been stitch, stitching, away. Bliss!

Saw that you won that one.. and I thought.. lucky Kaaren.. now she will have some fun!!! So Enjoy your goodies.. love how the x stitch is coming along... very pretty.. maybe this will get me going on mine... :o)

Congratulations on your win. I am sure you will enjoy the project.

I love your x-stitch project. It looks like you are working it on linen. Can't wait to see it all completed.

What great surprise for you. And I have to say the sampler is beautiful. I tip my hat to you. The only cross stitching I 've ever completed was a couple of 3" ornaments 20 yrs ago that had fairly simple things on them, lol! But I am the proud owner of a beautifully cross stitched christmas elf done by my sister on punched paper........it is wonderful. I love to look at counted cross stitch, just not do it! Loved looking at yours.

You are making great progress on your needle case. It is so beautiful. I know you will do just as well with the needle punch. What a fun project. I have yet to try that out, so I will be watching to see how it goes.

What a fun gift to play with, I'll look forward to seeing some punch needle. You are going very well with the cross stitch, it's gorgeous.

Your needle case is going to be gorgeous! You really took cross stitching and RAN with it! Congrats on your win too...

Congratulations on your win!

Your cross stitch is coming along very nicely. I, too, like that it is not perfectly symmetric.

Congratulations on your win! Have fun needle punching.
I love your cross-stitch..beautiful!
Julia ♥

Kaaren, what a great win! I adore punch needle too - it's exactly like a miniature rug. Have fun!

That was a wonderful surprise! And well deserved!

Congratulations on your win!
That needlecase is beautiful -- you're making great progress!

Your xstitch is coming along beautifully. I am amazed how you just move right along from one craft to the next so effortlessly (or so it seems). Pumchneedle is on my bucket list. Yep, I LOVE,LOVE,LOVE PN! The smaller the better. I might need little old lady glasses on top of a magnifying lamp to actually see what I'm doing but I think you can never have too much magnification! LOL! B=)

Well, I too KNOW I hit the jackpot with you as a friend!!!!! Thank you so much for your support right now. It means more to me than all the gold at the end of any rainbow. :-)

Congratulations with your gifts. Even the card is beautiful.

Speaking of beautiful...that is certainly your stitching. Life with a needle is not about speed but enjoyment. I am not a fast stitcher but can honestly say that I enjoy every stitch I make. I will look forward to seeing your project finished.

Maybe a silly question but is your mailbox not near your house? It sounds like it is farther away. I am not used to mailboxes anymore as we have a mail slot in our front door so my mail lands on our doormat. Perhaps it is silly of me but it is something I love about Holland.

Congratulations on your giveaway win. Punch needle is fun.
Your xstitch looks so great. You are getting it done in record time.

Hello, Heidi is my daughter, and she told me how supportive you were of her when the blogger decided to go after her.
I want to thank you for your caring. Heidi is very talented and I can see so are you.
Good things come to good people and I am very happy to see you won that great giveaway.
Thanks again.
Nancy

I love your cross stitch. You are so close to finishing now!

I want to let you know I have nominated you for a Sunshine Award. Congratulations! The award is for bloggers who inspire positivity and creativity. Thank you for the inspiration!
Take a look at your award on my blog.
http://yellowrosequilts.blogspot.com/

Kaaren....I'm thrilled that you like your punchneedle prize and I'm so excited to see you make it...you do such beautiful work and I must have missed something...did you say that this x stitch needlecase is one of the FIRST xstitch projects you've done?!?!?! omg you are one talented lady!

Your cross stitch is beautiful !!

Congratulations on winning the needlepunch. Your work is beautiful. I love "vintage" looking patterns too. I enjoyed looking at your blog.