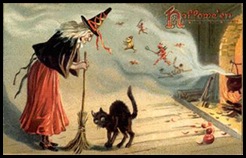 I find the origin and history of Halloween fascinating.

Halloween is the one of the oldest holidays still celebrated today. It's one of the most popular holidays, second only to Christmas…or so they say.  While millions of people celebrate Halloween without knowing its origins and myths, the history and facts of Halloween make the holiday even  more intriguing. 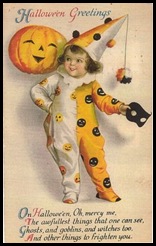 Some people view Halloween as a time for fun, putting on costumes, trick-or-treating, and having theme parties. Others view it as a time of superstitions, ghosts, goblins and evil spirits that should be avoided at all costs.

As the Christian debate goes on, celebrating Halloween is a preference that is not always viewed as participating in an evil holiday. Halloween is often celebrated with no reference to pagan rituals or the occult. 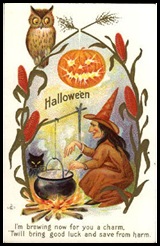 Halloween is on October 31st, the last day of the Celtic calendar. It was originally a pagan holiday, honoring the dead. Halloween was referred to as All Hallows Eve and dates back to over 2000 years ago.

All Hallows Eve is the evening before All Saints Day, which was created by Christians to convert pagans, and is celebrated on November 1st. The Catholic church honored saints on this designated day. 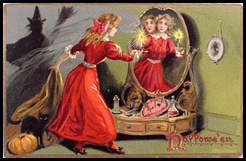 While there are many versions of the origins and old customs of Halloween, some remain consistent by all accounts. Different cultures view Holloween somewhat differently but traditional Halloween practices remain the same.

Halloween culture can be traced back to the Druids, a Celtic culture in Ireland, Britain and Northern Europe. Roots lay in the feast of Samhain, which was held annually on October 31st to honor the dead.

Samhain signifies "summers end" or November. Samhain was a harvest festival with huge sacred bonfires, marking the end of the Celtic year and the beginning of a new one. Many of the practices involved in this celebration were fed on superstition.

The Celts believed the souls of the dead roamed the streets and villages at night. Since not all spirits were thought to be friendly, gifts and treats were left out to pacify the evil and ensure next years crops would be plentiful. This custom evolved into trick-or-treating.  Interesting, huh?

Will you be welcoming the trick-or-treaters tonight?

Ohio is weird--they do not trick or treat on Halloween. They have Beggar's Night instead so we had trick or treaters on the 29th. Beggar's Night is never on the same day each year...you have to wait until the powers that be decided on the date and you read it in the paper. The reason for Beggar's Night??? Football is a religion in Ohio. Nothing shall interefere with High School football on Friday night or Buckeye football on Saturday. THE Ohio State Buckeyes play football tonight. I told you, weird!!! Happy Halloween to you.

That is very interesting - thanks for posting it! My DD and I were talking yesterday about the regional differences in what people call the night before Halloween - mischeif nite, goosey nite, cabbage nite, etc.

Devil's night here in MI for the night before Halloween. As far as I am concered, Halloween is just a fun night for the kids and no thought is ever given to the origin of it. I, too, love Halloween and all its decorations. Definitely second to Christmas. Happy Halloween everyone!

Halloween here is just for the young ones to go trick or treating...we used to have some mischief with toilet paper and smashed pumpkins but we don't seem to have that like years ago.

Happy Halloween to you and hubby!

I found your post most interesting. Thank you. Last night was cabbage night here in NY. (nothing like it used to be) Tonight the little gobblins will be out in full force trick or treating. I live in a college town. The BIGGER kids come out and trick or treat on their way to their parties.

Thank you for sharing, Kaaren. I'm not a fan of Halloween - growing up it was just a night to don a costume and go door to door collecting a huge bag of candy.

Thanks for taking the time to share the history of Halloween - very interesting indeed!

It's going to be cold for the small trick-or-treaters here in MN today. We're expecting rain mixed with snow. I'm certain that many of them will be going to organized parties where they will be warm and safe!

Very interesting...I also loved the comments from Stephanie--did not know that about Ohio!

There are no trick or treaters here but lots of parties and tons of special events,
Have a wonderful Halloween!
Micki

HI, how interesting. I've such a different perspective on Halloween from others. I loves in the states and really got the Halloween bug, then moved back to the UK where Halloween is rarely celebrated. I used to be a guide and brownie guider, and we weren't allowed to have Halloween parties! Then I moved back over to Australia, where it is definitely not an 'external' holiday. Last night we had two groups of trick or treaters, but we had our own multi cultural party going on by the pool. We had a Spanish student, who told us about her día de los muertos, and American exchange student who came dressed as a grasshopper (need I say more!) and a handful of Aussies and New Zealanders. We had lots of fun!

Very interesting; thanks for the Halloween lesson!

no trick or treaters at our place. i think they'd kill themselves trying to get all the way out here. same with door knockers.... but that's a good thing right? LOL
happy halloween.
julie xo

I just love those vintage halloween pictures. They are so much more interesting than any done now. It was fun to see them...

Yep, the history is interesting! We don't celebrate here...nobody has ever come around our neighborhood. We used to take our boys to my mum's neighborhood but they're too big now, so it's just another night.

UM...let's not talk about the T-O-Treaters. I might become insulin dependent because of those creepy little guys!

Interesting reading. I'm amazed at how much it's turned into a huge decorating season! Lots of people hang orange lights outside (like Christmas!) and put up other decorations. When I was a kid, most everyone had their carved pumpkins, but not much else... except those couple houses who went all out with scary music and "smoke" and other halloween fun.

Love the old fashioned postcards that you used in this post, could you tell me where you found these and/or how you downloaded them to your blog.
Thanks so much,
Kathy