While I was having fun making swap gifts over the past couple of months, many of my ongoing projects were relegated to the back burner.  Now that they’re all done and gone, I’ve been able to spend some time playing catch up.

I fell three months behind on my Tisket-A-Tasket BOM.  This past weekend, I was able to complete the wool versions of the May… 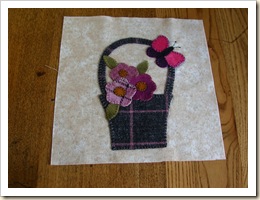 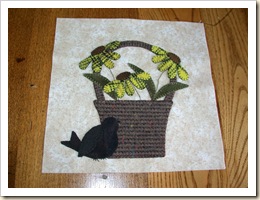 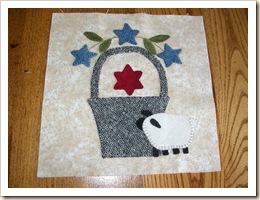 I still have to do the doo-dad embellishing but I’ll wait until the quilt is assembled before adding them.

I will probably start the traditional needle turn appliqué of the same three blocks in the next couple of days.

Not long after all my other swaps were put to bed, I joined the In The Good Ol’ Summertime Mini Quilt Swap…yeah, I know, I know…and as a result of some unseasonably cool and rainy weather over the last week, the last stitch was sewn last evening. 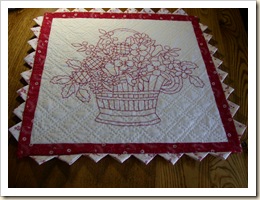 It measures about 18” x 18” and is worked in the traditional redwork style of embroidery and I hand quilted it. 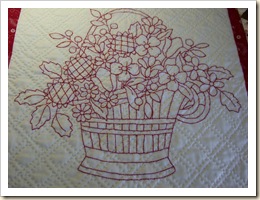 This little guy will be going to it’s new home in France sometime between now and September 21st, the mailing deadline.

Computer Problem Update:  About a week ago I downloaded an automatic Explorer 8 update prompt which caused many issues with my computer.  I performed a ‘system restore’ which clearly didn’t fix the problems I was having.  Yesterday morning I took it in to our local computer shop where the techie fixed it for me and it appears to be working like new again.  Evidently there have been a lot of problems with the Explorer update and Windows XP.  The only system it seems to be compatible with is Vista and he said even that’s not always the case.  So, exercise caution  if you happen to get this same update prompt.

What an absolute gem that mini quilt is. Wow that is one lucky French woman!

Gorgeous! Love it to bits!

Your redwork quilt is so lovely! The border and edging are a perfect compliment to the stitching. I really like this.

Wow it doesn't take you long to catch up does it? Love your wool BOMs...especially the yellow in the flower of June. Oh my goodness...your mini quilt is going to be loved by it's new French owner!!! WOW.

I wish I lived in France and was getting that red & white beauty!
Cute bunny blocks.

The mini quilt that goes to France...reconsider and send to me! I will love it more...promise! Ok...I'm dreaming after a sleepless night.
Also must comment on your wool blocks too. They are fantastic. I love that little blackbird one best!

Absolutely love the wool BOM you are doing. I've downloaded the patterns but haven't gotten around to making them. Wish I had access to wool around here....

Happy results with your catch up. I love your statement about computers and men. Oh so too. I hate having to rely on either of them but to their credit, all 3 men are techies and will come to my rescue.

I've gotten behind with my Tisket blocks as well - the applique version but I am up to date on the redwork version. Need to follow your lead.

Your basket blocks are so cute.
Love your mini quilt. I have stitched the same pattern but have not done anything with it yet. I do have plans for it.
Glad you got your computer problems taken care of.

Your mini quilt is stunning! Such beautiful intricate work. I am playing catch up on my baskets too. Almost done.

Your redwork is just gorgeous, I love doing redwork. Way to go on playing catch up, you did well.

OMGosh you are too funny! Love your blocks. That wall hanging is to die for. Love it! You have been busy.

Too late. My computer is sick or dead.

Your wool blocks are adorable, Kaaren! Are you using blanket stitch on all pieces?
And your mini quilt is gorgeous - such beautiful hand quilting!!
I avoided Explorer 8 at all costs after loading it to my work computer - arghhhhh!! I'm even going to try re-loading Explorer 7 to see if that works!
Cheers!

Your work is beautiful, kaaren! Thank you so much for showing us!

Oh you baskets are just darling! And you redwork is amazing, what a lucky gal who receives that beauty!!
So my Vista Laptop, has one good thing at least!!

Gorgeous fabulous redwork! That is truly beautiful!
Sounds like that upgrade of Explorer is doing nothing but cause problems for many, many people.

I love the wool fabrics you have chosen for your BOM... and your redwork stitchery quilt is divine, love the hand-quilting!

I agree with you about computers... the bain of our lives that we love to bits! I'm so fortunate that my lovely man works in IT, although he's always fiddling around... so maybe it's not so fortunate?!!!

Love your post title...it's the story of my life! But now that my giveaway is finished and my Christmas in July package sent...I'm breathing a little easier!

Kaaren, you are going to be the queen of swaps, you put so much thought and skill into them. The redwork is just gorgeous. The wool blocks are looking very good. Love them.

You have done quite well playing catch up! You are more disciplined than I - I spend too much time on here even when I try not too. I always enjoy seeing those BOM. And redowrk - would you believe I never heard of until I started blogging?

LOL - yes comptuers are like men - and I don't want to live without either of mine! LOL

Have a wonderful Friday!

Love those blocks of the month by Anne. Your versions are super.

Karen your block is just lovely that will be a wonderful treasure for the France swap partner... I have missed your posts but am catching up and don't want to miss a thing!!

I am YOUR LUCKY FRENCH SWAP PARTNER ! I receive today your amazing quilt,so beautifully hand made with the little gifts you generously add.Thank you very very much, I am so happy !!!
Big kiss from France