Timing is everything…so the saying goes…but in this case, it couldn’t have been more OFF!  Last Friday, on the same day that my modem was fried by lightening, I received my F-R-I-E-N-D-S swap parcel from Mai and I had to wait for an entire week to thank her because I just received the replacement modem yesterday.

In all honesty, I think it was the longest week of my entire life.  I came to the realization that I don’t need cigarettes or alcohol or even food for that matter…well maybe a little morsel between keystrokes…but I NEED the internet!

So rewind to last Friday.  I went to the post office to collect my mail and there it was, a little card in my box telling me to go inside to collect a parcel.  When I handed the card to the gal behind the counter, she said that I had a package from The Netherlands.  I just knew it had to be my swap gift from Mai!

I raced home and was just about to open the package when Sam reminded me about taking photos.  Whew!  I grabbed the camera and then the fun began! 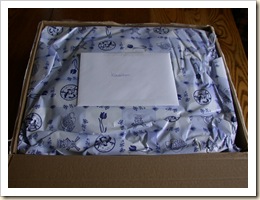 As soon as I saw the Dutch-themed wrapping paper, I knew I had to share the excitement with my best friend, Lucie.  I gave her a quick call and she was at my house in less than 5 minutes.  I really did wait til she arrived before proceeding. 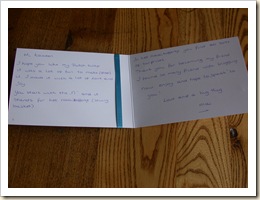 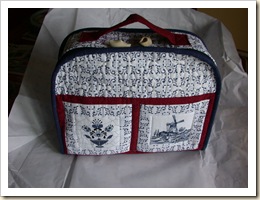 the ‘piece de resistance’…a sewing case that Mai designed and made especially for me.  My heart was doing flip-flops and I was in seventh heaven! 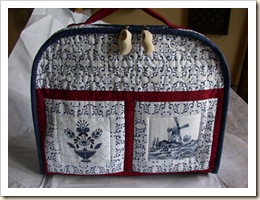 The little wooden shoes are attached to the zipper closures to assist with the opening and closing.  Did you notice the Dutch windmill and floral motif?  Exquisite! 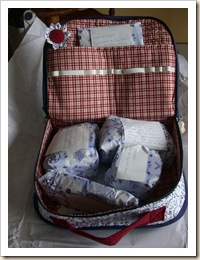 Inside, I found a multitude of treasures, all wrapped in the same Dutch-themed wrapping paper.  Can you see the floral pincushion in the upper left corner?  It actually snaps to the inside of the case to keep it stationary. 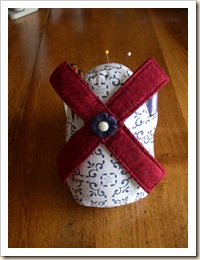 The first treasure I unwrapped was a windmill pincushion, another original, designed and made by Mai. 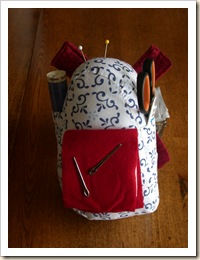 Tucked into the pockets of the pincushion were a pair of scissors, a package of needles and of course, some thread.  And… 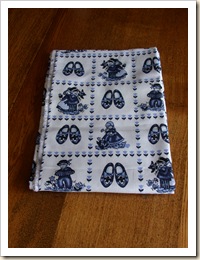 some Dutch-themed fabric which I already have plans for…and… 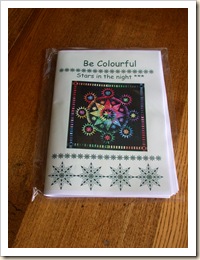 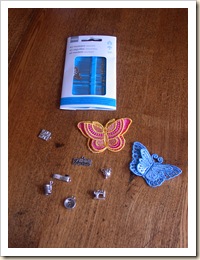 more needles, two embroidered butterflies made by Mai’s Mom and the most beautiful silver sewing charms that are just destined for my scissor fobs!  And… 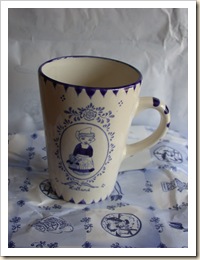 a blue and white mug reminiscent of traditional Delftware which now sits next to my computer to hold pens and pencils because I’m afraid I’ll break it if I use it for tea or coffee.  And… 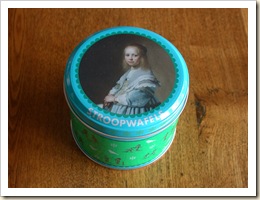 some Dutch wafer cookies which between Lucie, Sam and myself, didn’t last too long…and 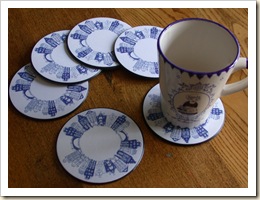 some blue and white coasters. 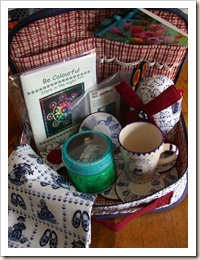 I am truly blessed not only to have received such incredible gifts, but more importantly, to have made a new friend from a country that I had the good fortune to visit not long after I graduated from university and still ♥ to this day. 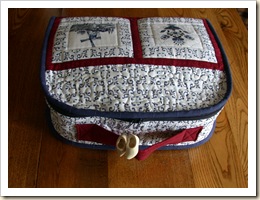 I brought my sewing case to my Tuesday night stitching group and as you can well imagine, the ladies were VERY impressed.

Thank you again, Mai for your talent, thoughtfulness and friendship.  And thanks also to Khris for organizing this swap.  You have both touched my heart very deeply.

What an amazing gift!

Welcome back to the wonderful land of blogging!!! :o))
Oh MY... that is an absolutely wonderful gift...:o))
Just the bag is incredible and all the wonderful sewing related things she added.. gorgeous... LUCKY YOU... Mai really made a amazing job on all of the gifts.. have seen the wonderful little windmill before and loved it!! :o))

Hope you are up for some more Dutch comment Kaaren...lol...but its a very lovely package with wunderful gifts you got there...love the sewing case and the pincushions...Mai did absolutly a great job in making and finding you the presents...enjoy!!
greetings Francien.

Wow Karen, you have absolutely beautiful things, many congratulations to Mai for the wonderful work!!
It can be said that Swap Friends was very good...
Cheers
Cristina

Wow, wow, wow be still my heart! What a delightful bag and goodies. Enjoy!

I lived in The Netherlands for four years. Just seeing wooden shoes and windmills...oh and anything Delft sure brings back wonderful memories of such a beautiful country. Such a treasure and new friendship made!

Well that was worth waiting a week to see - not that we knew we were waiting! Mai really did up an amazing swap for you. So many sweet treasures. I know it will make you smile and think of you rnew friend in a land far away!! Enjoy!

Wow, what a sweet and thoughtful gift!

Wonderful gifts!!! You hit the jackpot with Mai....such talent.

what an unbelieveable gift..the many surprises is astounding!! she really set the bar on this one!! everything is so well made how very very thoughtful

Welcome back Kaaren. Your swap gift from Mai is incredible! I can see that the sewing bag is something you'll always treasure.

Incredible swap gifts! How fortunate for you, Kaaren and how generous and creative of Mai!

She out did herself. Each and every treasure inside is special but the sewing bag itself is the best.

That was just about as fun as Christmas morning Kaaren, thanks for sharing and blessings to Mai for such an amazing gift from the heart.

Goodness me! What beautiful & special gifts.
Glad you are back up & running, missed your posts.

Wow! What fantastic swap goodies. The windmill pin cushion is amazing, the bag is incredible and all that beautiful blue and white is gorgeous!

Oh my goodness, you have received some beautiful things!!

What an incredible swap gift Kaaren! You had to have been so thrilled. I love the sewing bag and boy did she do a fabulous job on it. But the 'filling' is so appropriate for it too. Does she have a blog herself?

Glad you stopped by for a visit since I finally also did some quilt blocks again. :-) And I am searching for some sites to send you about starting to stitch.

These gifts are realy beautifull and very original, I love them all and you're very lucky with May as a friend! Renata.

Wow, what a wonderful gift! Every thing looks so nice. Love the bag!

What lovely surprises! You must have been thrilled!
Micki

OH...MY...GOODNESS!!! The sewing case alone has me drooling--with little wooden shoes and goodies inside the bag too. Oh the windmill pincushion is absolutely darling and perfect for you. I hope you saved the wrapping paper. :o)

What a fabulous and thoughtful gift. The bag is gorgeous and the attention to detail is wonderful. Congratulations.

Oh Wow! What a wonderful swap package! Mai did a beautiful job on everything. I know you will be enjoying every little gift!

Mai is so very talented, and such a lovely lady! As are you, and I am so glad you have both made wonderful friends in each other!

As for the gifts Mai made for you.... W.O.W! They are jaw-droppingly gorgeous (well done Mai!)

It really was a great swap eh?! Such fun!

EUH, I don't know what to say, when I read all the comments, I blushing, I'm also a little bite proud that everyone thinks I'm a talented lady. But I have to say I just do my thing. And it was a lot of fun to do this swap with you. I love to have you as a friend.

I ADORE the mug! fun stuff!

Wow, that sewing case is awesome. I just love the wooden shoes. Too cute.