When I went to the post office yesterday to collect my mail, all that was in my box was a card indicating that I must go into the office to claim a parcel.  There was a new gal working behind the counter as our regular Post Mistress retired last Friday, so I handed her the card and she went into the back to retrieve the item.

It took only a few moments and upon her return, she handed me a large brown envelope and said, “So you’re the lady who gets and sends things all over the world.  This one is from England.”  In a small town, it doesn’t take long for ‘news’ to get around.

I knew it was my pincushion swap gift because it said ‘Pincushion’ on the custom declaration form.  I just couldn’t wait to get home to see what was inside! 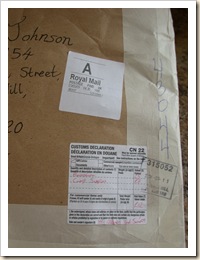 When I got home, I immediately went into the kitchen, grabbed a pair of scissors and sliced the envelope open being as careful as I could.  There were a gazillion wrapped items inside, so naturally I reached for the largest one and tore off the wrapping. 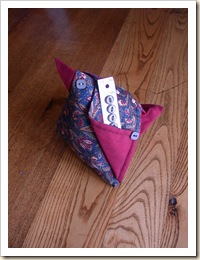 A rooster pincushion with a tool caddy on it’s back to hold all kinds of sewing implements!  Isn’t he soooo cool?

After seeing Mr. Rooster, I just couldn’t wait to get at all the other goodies. 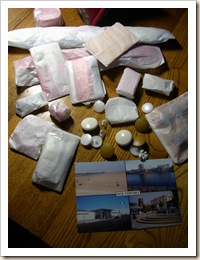 And then it happened…the battery in my camera died!!!  Just after I took this shot is when it happened and that’s probably why the photo is so dark because there wasn’t enough juice left to set the flash off.  Drat!

You can be sure that the first thing I did this morning was go into the kitchen to see if the battery had charged overnight.  Yep, the red light was out so that meant it was charged and ready to go.

One by one I opened all the wee packages and oohed and aahed over each one. 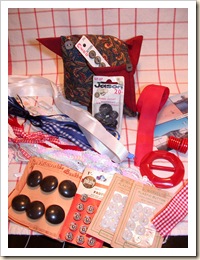 Melanie  sent me all these wonderful goodies.  In keeping with the red, white and blue theme that I had written about in my profile…as well as liking vintage things…Melanie certainly outdid herself.  She included a balance between old and new…buttons, snaps, ribbon, rick rack and a postcard of Southport, England where she lives with a lovely note to me.

Thank you so much for your kindness and generosity, Melanie.  You certainly made my day…actually days…seeing that I had to spread my enjoyment over two days.

Another pincushion to add to my ever-growing collection.  And just in case you didn’t know, you can N-E-V-E-R have too many pincushions!

Ohhhh... what a package you got.. loved everything... and you said it.. one can NEVER have to many pincushions.. wish I knew this a long time ago... lol.. I just had one... for years and years.. and when I got into blogging.. I got to see all the lovely pincushions made all over the world.. So I am totally agreeing with you!! More pincushions to the people!!! :o)))

Wow Kaaren, you sure got a good pincushion partner!! Very nice. I just sent my pincushion off to my partner yesterday...my very first one I ever made. I posted a pic in my blog.

As soon as I saw the chicken I knew it was from Melanie. She's always so generous with her swap packages. Oh my...I have a battery recharger with extra batteries. I'm never left uncharged. I'm not sure I would have been able to wait to open the goodies until morning!!!

That rooster is soooo cute! What neat pincushions you gals come up with. I love seeing the different shapes. Each one looks complicated to me!!!

Enjoy all of the wonderful goodies!

Hia Kaaren, so glad it arrived safely and that you liked it.

LOL One of my Christmas presents this year was a spare battery for my camera. I have been known to go through the 250 photo allowance and change the chip only then have the battery blink.

I didn't name the rooster, so feel free to call him whatever you like. I am so glad everything arrived for you. I love pincushions too.

What a fun batch of things you got there! Lucky you! I have an extra battery for my camera so one can charge while I use the other one. Works great that way. I recently got a new camera and same thing extra batteries so one set can be charged and ready to go when I need to change them.

What a delightful package! So many bits, bobs and treasures!

So, what are your favorite colors?

So many wonderful goodies! I'm sure I wouldn't have been able to wait the 6 hours! The pincushion is so unique!

Oh you poor dear! What agony to have to wait to reveal all your goodies!
Melanie sure sent a wonderful package!

How could you manage to wait to the next morning to open everything?
You must really like pincushions!
I have not yet received my pattern for the fabric covered boxes. As soon as I do, I will let you know the technique like you asked. I think the designer is out of the town and that is why I haven't received the pattern.

What neat gifts - I saw the rooster on Melanies blog and wondered who the lucky gal was - it's, you, Kaaren!! How nice of her to send so many fabulous goodies! And I commend you for being able to wait to open the packages - I would have sneaked down in the middle of the night to see if the camera had charged - LOL!
Cheers!

What a bundle of lovely goodies!!! You lucky lady! :-)

It must have been post man day. My parcel came as well. Inside was my pincushion and other goodies to boot.We are two lucky ladies.

Wooohoo!!
What a great bunch of goodies from Melanie...Yipppee!!
Melanie was my Swap partner in the Pincushion swap too :p... I sent to her...lol
Quilters are just a great big circle of friends, no matter where we are....I love that!!!!!!
hugs
Robyn xx

Now I thought is was a pincushion swap? wow look at all the goodies you got!! How super fun and sweet!!

Hi Kaaren! I am so impressed that you waited until the following morning to continue opening your gifts - although, the anticipation is fun isn't it?!!

Melanie sure sent you some beautiful items!

I have to echo Stina, as she tickled me when she wrote "More pincushions to the People!" he he he..

Kaaren you are so lucky what a great swap and that Rooster suits you..wonder what you are going to do with those buttons.. I can't even imagine cause I know how creative you are.

Wow you made out like a bandit. What fantastic stuff you got.

What a really cute swap! I don't know how you waited the 6 hours. Really that was a bounty of goodies.

Very generous and beautiful giveaways...I'm new to your blog via Carrie P. at a passion for applique...Thanks for entering me!

I'm so glad you received such a super fun package from Melanie, the rooster looks great and all the extra's...Thanks for joining!

Very pretty pc! Looks like we both had good partners. :)

What a wonderful swap. You recevied a very lovely pincushion. Lucky you.
M