Although we had no rain over the weekend and the sun played peek-a-boo with the clouds, it was still a little too cool to work outdoors in the garden so I stayed indoors and did a little Spring cleaning, read and stitched.

Have you seen the June 2009 issue of American Patchwork and Quilting?  It’s my most favorite quilting magazine and I look forward to each new issue because there’s always something in it that I tag and add to my ‘to do’ list.  This month there are two projects that I’d love to make, the first being a scrappy quilt called Pick & Choose and the second one called Mix It Up using 1930’s prints using the classic Jacob’s Ladder and 16 patch blocks. 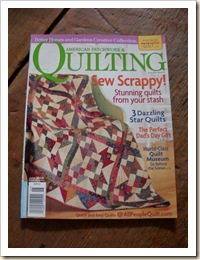 The featured designer in this issue is Anne Sutton of Bunny Hill Designs.  The article has some tantalizing photos of Anne’s ‘to die for’ studio and sheds some insight into her daily life as a designer.

Coincidently, one of the projects that I completed this weekend was the appliquéd version of the 4th block in Anne’s Tisket-A-Tasket BOM series. 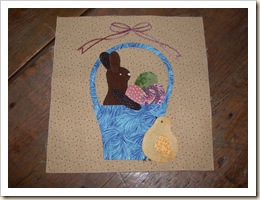 Also included in the magazine is one of Anne’s designs called Sweet Tweet.  It would make a perfect baby quilt, done in pastel Pinwheel blocks and embellished with rickrack, buttons and two sweet appliquéd birds.  Edit: That makes three tagged projects in this issue alone.

I hope that you all had a safe and Happy Easter.

oh..that means I have to go get a copy of that magazine! Thanks for the preview ;o)
I have to get started on this month Tisket a Tasket BOM..isn't it so fun? I love the basket fabric you chose.
Jill :o)

Sounds like you've got more projects lined up. I did get the magazine and must agree it is a good one! I've got a little start on the fabrics for Mix It Up...woo hoo!

I can't wait to see the Tisket Tasket blocks all made up and put in a quilt. Everyone's is so different and so cute. I could live in Anne's studio.

You do make me laugh, i live in a little town and we have a main post office, my mum works there, so everyone knows me by name!!
Love the rabbit applique, hope you've had a lovely Easter.
The boys have kept us busy, sun beginning to sneak out so hopefully we'll be able to do another rabbit hunt today!!

Wow, you have the next month or so all lined up to go!!! Now I need to go and get that magazine, but I do love it too!

Your T-A-T block is great! And isn't this a great issue...I love the studio articles...Anne's is wonderful!

That magazine is one of my favorites too! I always am looking through going Hmmm, what can I make. I don't think I have gotten mine yet, but then we haven't gotten the mail this weekend!

I just stopped at Sam's store and got the magazine. Love everything in this issue.
Yay, I can enlarge your basket block. Very cute.

This issue was the BEST, Karen! I wanted to make a dozen projects in it - but I'm taking a deep breath, tagging the pages, and waiting 'till I have more time - LOl!
Cheers!

I have been eating up that magazine too. Just this afternoon I finished one of the projects. I'll post it soon.

Hi Kaaren, Hope you had a great Easter. I subscribe to this mag isn't it great. I loved Anne's studio. Makes me want a larger room, maybe in my next house.