This is mid February, right? And this is Canada, right? Then what the heck is this rain all about? We were supposed to have freezing rain on Tuesday and even the school buses were cancelled in anticipation of the bad weather but we dodged that bullet because somehow the wind came up and blew the storm off course. Yesterday the daytime temperature reached almost 40F and we opened the windows to let the fresh air in. It started raining late last evening and it's still raining but it's supposed to return to normal temperatures by tonight. The snow looks like it's sunk about 8" but there's still lots of it.
I finished sewing the half square triangle outer border on the Primitive Garden BOM this morning. 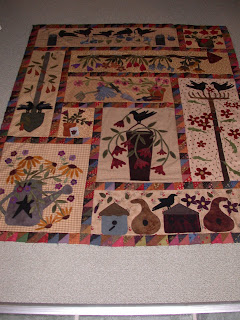 That was alot of work and I'm happy it's done. In all honesty, I need a break from this quilt. Please don't get me wrong because I love the design, but it's really been a labor and not always of love. Some of the background fabrics are homespun and I've never sewn with homespun before. I love the look of homespun but found out as I was putting the blocks together and adding the sashing and outer border that this fabric stretches a WHOLE lot! I had to do a bunch of ripping out in the process. As a matter of fact, it seemed like I was ripping out as much as I was sewing to put it together but I was determined not to let it get the better of me. I'm sharing this because I just want to give a head's up to other newbie quilters out there about my frustrating experience with homespun. I'll never not use it again but I now know what to expect and probably will be a little apprehensive the next time. When the last four border blocks arrive, I think I'll just set them aside for a while to save my sanity. (VBG)

The other day I spoke about getting a new lease on my creative life when I was inspired to rearrange, organize and clean my studio. Mel left me a comment about how she loves a clean studio and then doesn't like to mess it up after she's cleaned it. I was like that for a day or so and then I dove head first into those half square triangle thingees and you should have seen the mess. But, it's back to normal again as I cleaned up right after I had finished ironing the outside border strips and I think that's the solution...clean and tidy up right after you're finished and then it's done!
Now I need something portable and easy to work on. There's always my Grandmother's Flower Garden work-in-progress but decided instead to do the Tisket-A-Tasket BOM in wool...for me. The one I'm appliqueing using the needle turn method is going to be my friend Lucie's Christmas present. The first block is ready and hopefully I'll start to stitch it this afternoon. 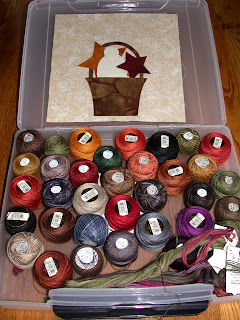 Lucie and I are making the 65 mile trek to the BIG city tomorrow with stops planned for Home Depot for peg board and molding (see previous post), quilt shop for more embroidery thread and other "must haves", Michael's for embroidery floss for a redwork project that's in the offing and of course...lunch.
Happy stitching!
Posted by Kaaren on Thursday, February 12, 2009

Hi Kaaren,
Your quilt is perfect. Love it. I get like that too when I clean my sewing room I won't use it for a day or so but then I am off making another mess. Have fun shopping tomorrow. Hope you have much better weather too.

Sounds like fun. Have a great day. I know of a couple of girls that had to put their PG quilt away for a while too. I am still on block four. I love it. It certainly takes quite a bit of time. It is beautiful!

Beautiful quilt Kaaren! Love the colors and the pattern!

My eyes also loved looking at all your beautifully colored threads!!!

the big city?? where?? hope it is near meee
your Prim Garden is gorgeous!! it was I am sure really worth the few frustrated times you had. I have a bundle of homespuns I have not touched due to the reason you stated.
I absolutely love your "stash of embroidery it is sure looking at me to come home..LOL
Your BHBOM is so adorable as well. I love the Feb block she has posted. Well I hope to hear from you if your on your way to Toronto

Kaaren Your Prim garden is wonderful! I just ordered the pattern from my local quilt shop and can hardly wait for it to arrive. I too just gutted my sewing room, it feels so good to have it back in order.